That being said, I wanted to share my experience with this printer in hopes that others might find it helpful if they're thinking about buying one themselves.

I've owned a few 3D printers now, and the CR-10S Pro has been my favorite so far. Assembling the printer was a breeze! The printer ships in 2 semi-assembled parts and only need to be screwed together with 4 bolts at the bottom of the printer. I did, however, run into some issues before I was able to print consistently. Hopefully this will help others if they run into the same issues I had.

Originally, before each print, my sensor would need readjusting with the screw at the top of the sensor. Occasionally, the sensor wouldn't even recognize the print bed, and the nozzle would "dig" into the bed a little bit. I fixed this by manually bringing my nozzle to the middle of the bed and lowering the z-axis until the nozzle is JUST TOUCHING the build platform. Then loosen the 2 screws on the left of the sensor and lower the sensor a little bit (it should only be about 2mm above the build platform at this point/ or 2mm above the tip of the nozzle). Mine was at least 5mm+ above the build platform and it was leaving a lot of room for the sensor to pick up on outside interference (such as room temperature/gust of air/breathing). This was causing my printer to home-in and auto-level incorrectly... After lowering the sensor and tightening up the 2 screws on the left again, follow the normal steps for adjusting the sensor distance (using the 1 screw at the top of the sensor). Lowering the sensors physical distance seemed to fix my original sensor issue entirely.

My bed was also slightly warped, the left-hand side of the print bed was slightly too high, causing larger prints to have inconsistent first layers.. Smaller prints weren't an issue. This was fixed by ordering a 3mm thick glass bed and replacing the stock bed that Creality included with the Pro.

During my 3rd print, the printer stopped printing and started to...

Excellent printer after some minor adjustments! Great features for the price! Overall I'm very pleased with the CR-10S Pro and I'll definitely be looking at buying another one if I need another printer. The convenience of having all of the Pro's features right out of the box has been worth every penny! I've really enjoyed this printer a lot so far! 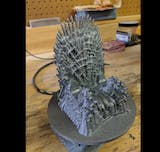 All the parts are from Creality, will be directly shipped from Creality. Solve adhesion problems, either sticking to hard or not enough, its easy ...

Key Features:.Special power chip is adopted to support 24V power input..Circuit optimization of the circuit board can effectively solve the heating...

Work on Creality CR-10S Pro BLTouch Version: V3.1 Key Features:1. Simple: BLTouch is easy to apply because it is small and simple. Since the BLTouc...

Work on Creality CR-10S Pro V2 BLTouch Version: V3.1 Key Features:1. Simple: BLTouch is easy to apply because it is small and simple. Since the BLT...

GET TO KNOW US

LET US HELP YOU

Added to your cart: